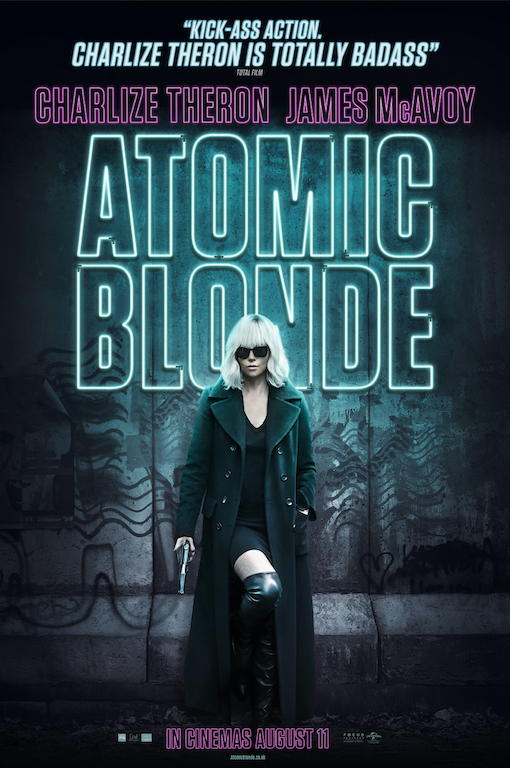 John Wick is a high I'll keep forever chasing. Atomic Blonde kind of gets me there, but doesn't carry me the whole way.

Directed by David Leitch, a.k.a. the John Wick co-director who had more than one movie in him, it feels at times like Michael Mann doing action. Maybe it's the deliberate pacing. Maybe it's all the blue lighting and music and late 80s period.

Lorraine Broughton, Charlize Theron's chic MI-6 agent, has her work cut out for her. She's sent to Berlin to recover a stolen spy list right before the wall crashes down. She's assigned to deal with David Percival, MI-6's Berlin “station chief”, a drinking, random, downright feral James McAvoy. The KGB has her made since she lands. Her bosses have told her to trust no-one. She's being followed. And she's pursuing a double agent.

We know things went south. The movie starts with her debriefing in London, ten days later. Her bosses aren't too pleased. Lorraine herself looks like she's been through the Bruce Willis Late 80s Training Camp, being more bruises than skin. When she starts telling the story, and everything goes wrong the moment she touches down in Berlin, it's no surprise.

For an action movie, though, its steady pace can be slow at first. There are a few sudden scenes here and there, a lot of which the trailer spoiled. Their violence is stylish, choreographed to the centimeter, but sporadic. Later, an impossible 10-minute single take steals the show (it is either digitally composed, or someone added punishing makeup in about 0.75 seconds).

It just doesn't give me the same high. It lacks the focus, the single-mindedness. It adds some fridge logic, which gets worse as it progresses. Theron has poise. She must have trained like a maniac, and both she and her stuntwoman do an excellent job, but outside of the fights she gets little to do but smirking. Sofia Boutella shows up and does her bit (I'm still waiting for a movie to give her as big an opportunity to shine as Kingsman did). McAvoy, though, is a treasure. He devours every scene he is in and, given half a chance, will swagger the limelight away from all involved.

As a drug, the Atomic Blonde rush is entertaining, and occasionally thrilling, and much better than the industrial whisky sameness of John Wick: Chapter 2. I'll have forgotten it in a week, but for a bit, it was a decent way to kill a Sunday afternoon.