Death and the maiden 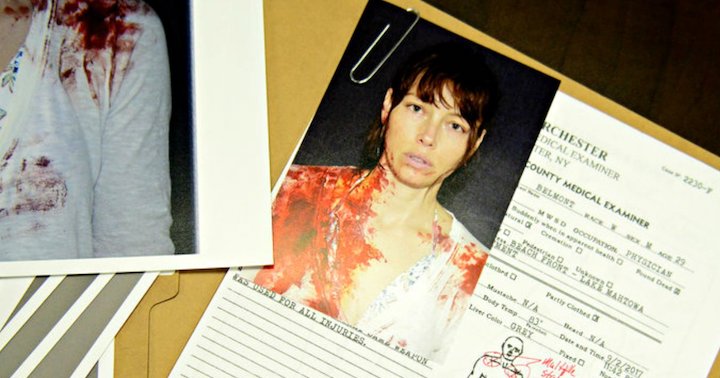 The Sinner is an atypical murder mystery.

We know who killed young Frankie Belmont, as he goofed around with friends at a beach: it was Cora Tannetti, thirty-something mother, who on weekdays helps her husband and father-in-law run a home repair business. We know how: she stabbed him repeatedly, on the chest and neck, with a paring knife, exploding upon him like an angry mountain lion with no warning whatsoever.

Those two are indisputable. Not only Cora admits to it, but dozens of people saw her, including her husband and son.

What we don't know is why.

It's not that Cora isn't telling – she doesn't seem to know herself. She looks as shocked as everyone else by her actions, is eager to confess and declare herself guilty. Still, she can't speak to what possessed her to murder Frankie. She'd never met him before. None of Frankie's friends knew her. He was a doctor who used to play in a band; she was a mousey housewife and former waitress. They'd never crossed paths before.

She admits to it. She wants to pay for her crime and be done with it.

Detective Harry Ambrose, one of the two assigned to her case, thinks she is almost too eager. He takes a paternal liking to her, believes they are missing something. There could be some extenuating circumstances, some trauma, something that caused her to act this way. He wants to make sure they aren't overlooking anything before her arraignment. Her behavior is unjustified, strange. Nobody just up and does something like this, is his take.

So he's got his theories, and viewers do too. Part of the reason people watch murder mysteries is to see if they can figure out the solution before they hear the answer. That carries you through a couple of hours, but for an 8-episode series, you are going to need to have characters people want to spend time watching.

It can't be just Cora. Jessica Biel does a decent job, but Cora is a cipher, and as much a puzzle box as the reasons behind her actions. Her husband is a simple man, doing his job, buffeted by events. It's all on Bill Pullman's Harry Ambrose.

Most of Bill Pullman's recent characters come across like current-day selves of his Serpent and the Rainbow Dennis Alan. Dogged but damaged, survivors of terrible things, barely getting by and coping 30 years later. Ambrose is smart, with a work ethic that engulfs his personal life, but he is no Hercule Poirot. Pullman doesn't play him like a misunderstood genius fighting police apathy. Instead, he is hesitant, like a just-recovered alcoholic, unsure of himself and his standing in the group. He might be right, more often than not, yet his main hurdle is not the system's indifference but his inability to communicate.

Being right is not enough. You need to be able to make it clear to others and win them to your cause. Ambrose's stubborn I-know-better-ness doesn't help him, personally or professionally. The tension comes not only from if he'll find the pieces he needs, but if he'll be able to get others to even look at them.

Cora's actions are a tincture spreading across the community, staining, revealing cracks. Ambrose claws at these with his blackened fingernails, pries them apart, trying to find anything that can help Cora. Pieces drop out of almost everything he cracks open, but Ambrose (and the viewers) need to figure out if they belong to the right puzzle.

Would this be the one bit that would flip a woman from a quiet mother to a violent murderer? Why would this have started that rumbling in the back of her self, the hateful drone that she had kept down, chained, so that it wouldn't come out, and that even now, covered in blood, murder weapon in her hand, she doesn't dare look at?

The why is all that matters.