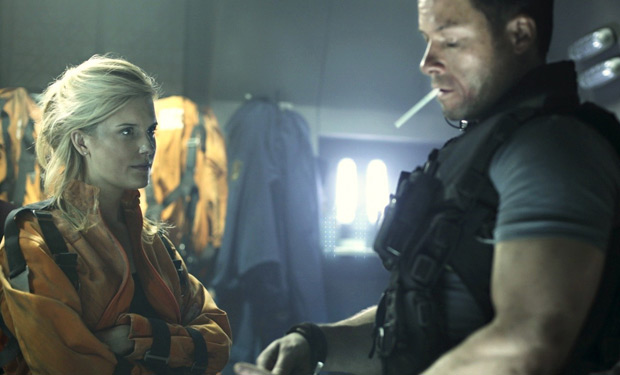 Sometimes the thing you need is a fun, wise-cracking action movie.

Lockout is what you'd get if you lock Guy Pearce in a room for six months with a set of weights and tubs of protein shake, so he can prepare to play Snake Plissken by watching Die Hard and Last Action Hero over and over.

He plays CIA Operative Snow, caught in a double-cross where his friend gets killed. He refuses to cooperate with a Secret Service he doesn't trust. As a result, he is about to get sent to an orbital maximum security prison when (wouldn't you know it) a shit-show at the same jail ends up with the U.S. President's daughter as a hostage.

Wouldn't you know it, our smart-mouthed jackass gets an offer to rescue her, which he takes because a friend of his also happens to have ended up there.

Yeah, the writers locked themselves up only with Carpenter's Escape movies. But while it hews close to its inspiration, considering it a copycat would be a disservice to how much silly fun Lockout is. Hell, it's a better movie than Escape from L.A. and a significant improvement on how you'd adapt Plissken's first outing to recent times. Sorry, John.

You know the rest. Colorful psychos run amok. Snow gets on the station to chew bubblegum and kick ass (but he's... you know). He cracks wise. He gets in trouble. He blows up things and thugs. He banters with his charge, who has a mind of her own about what they should be doing. He works to prove his innocence. Assholes act like assholes throughout and get their comeuppance later.

Anything science-related makes zero sense, because we wouldn't want to distract from the cinematic goofiness. Don't worry about it – there are about 15 seconds of that in the movie, total.

Lockout is the kind of movie where you can tell almost everything you need to know about it in the first 90 seconds. If the way they introduce Snow doesn't at least put a smile on your face, move on. If it makes you cackle, then grab a beer, pour some mixed nuts on a plate, and plonk yourself down for 90 minutes of quips and action.