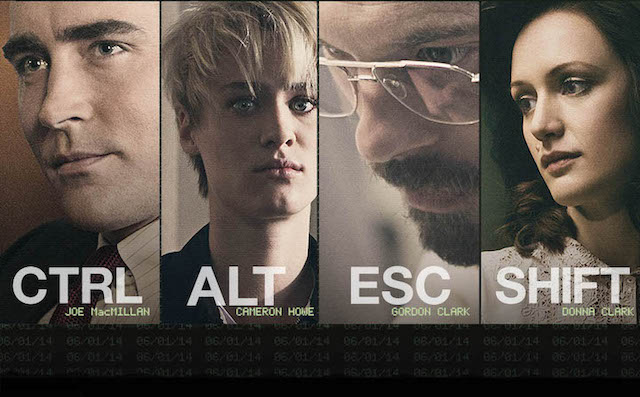 I originally reviewed Halt and Catch Fire in two parts, first seasons 1-2 and then seasons 3-4. Here are both short reviews together.

Nobody was adding math co-processors to computer kits back in the 8086 times, much less portables.

It shouldn't be what I say about this show, since it doesn't have a lot of tech background. Its history feels retrofitted, retroactively convenient for the times. They are too visionary, too misunderstood, too under-appreciated. It's got some well-written drama, but as far as tech or entrepreneurship goes, it's lacking.

Its main sin is that, two and a half seasons in, it doesn't make me want to run out and build something. Anything.

It does make me want to pitch, though.

I guess that's something.

Halt, at the end

Halt and Catch Fire continues its “tech's greatest hits” tour in seasons 3 and 4, with their characters inventing even more things ahead of their time. In less than 20 episodes, they manage to come up with:

It's a techie's face-palming wonderland. It features an anti-virus written in BASIC, a packet sniffer which can sniff packets hour or days after the fact, and Unreal Engine-level graphics in 1994 (for an Atari game, no less).

But finally. Finally, at the end of season 3, they capture the builder spirit. That thing emanating from a few people, alone inside four bare walls, trying to figure out if there's something they can create out of someone else's concept. The angles of attack. The frustration of being left out. They get it right. Even if the writers can't stop themselves from making Cameron a über-genius who can build entire tech epochs by herself.

Its tech is window dressing, anyway. It's just there to anchor the drama and give them something to argue about.

This thing we do – programming, engineering, building businesses, the whole thing – is nothing but a hack. It's a hack implemented on top of a system force-grown, on a budget, against much more modest requirements: to avoid getting eaten by a tiger.

Season 4 understands that. Building stuff is great, and it provides a purpose, but it's also methadone to keep you calm while you find out if you were one of those who made it. Methadone only gets you so far.

You throw rational people into a room, give them something they all feel strongly about, and watch the apes club each other with keyboards.

Most of them do OK. Boss takes one step outside himself, gets a glimpse of greatness, but it costs him himself. Gordon realizes his potential, grows as a person, even if that growth is stunted. Donna wakes up, starts walking her own path, then runs, picks up so much speed she can't stop herself, no matter how conflicted she is about where her legs take her. Joe goes from charismatic salesman to hating his success to Jobs-wannabe to somehow coalescing all the personas into a cool John Cusack, then back to Joe. Only Cameron remains Cameron, her wardrobe gradually less janky but her persona just as sketched, the chip that doubles for a pauldron just as big.

She's only there to introduce chaos, anyway. Yeah, she's the one coming up with most of the impossible breakthroughs. But her whole shtick is to proclaim, in anger, why she's right and everyone's wrong. With as much door-slamming as she can manage.

It works, as a tactic. A decade of fighting about implementation details can make you feel you belong, even if the place is at each other's throats. Arguing means you care what the other thinks.