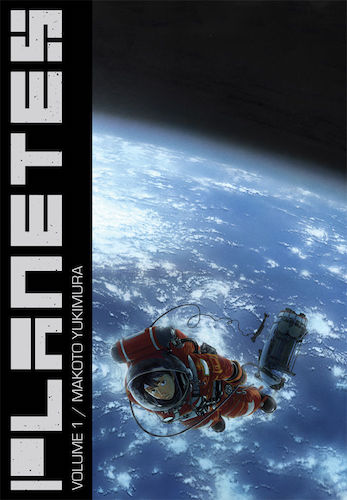 It's easy to imagine space having a meditative quality. You, inside a metal tube, floating in the void, weightless, with no extraneous sounds for a few dozen thousand kilometers. The tin can keeping you alive doubles as an isolation chamber. With nothing to see, anywhere else, you look inward.

Nothing helps you focus like having nothing all around you.

Planetes is a manga set in a future where space travel – at least between the Earth and the Moon – has become commonplace. So commonplace there are blue-collar jobs. The main characters are a crew of garbage collectors, working in space picking up the debris that could threaten other ships.

There's Yuri, the stoic, inwards Russian dealing his wife's death. Fee, a brash American pilot chainsmoker who takes no crap from anyone (almost). And Hachimaki, a Japanese full of dreams who says he'll get his own ship one day, as soon as he jettisons the dead-end gig he's using to pick up some cash.

There are shenanigans involved, as author Yukimura Makoto feels his way through the format. Mostly, it's a book of low-key emotions. The crew deals with vast emptiness and cramped quarters, their world reduced to the 2 or 3 people they share a ship with.

It creates a tension in the narrative dynamic. The story can have fun but doesn't goof around too much. There is adventure and some action interludes, but they never become the point. It's alternatively about people doing their job, world-affecting conspiracies, and quiet introspection.

As a story, it keeps you wondering what's going to come next.

For the characters, though, it's about loss, and acceptance, and change. With all that empty space, the nothingness threatening to suck you away, you're going to have to find your own footholds. Lacking external stand-ins for meaning anywhere around you, you have to provide them yourself.

Boy, is that hard, and Yukimura can make it all feel painfully human.

He concocts the conspiracies the crew get dragged into with the same ease as he presents the strife of a kid trying to live up to his elders. He can put a multi-page chase sequence or make you feel loss in three panels.

You can get what you want as long as you are a crazy, selfish prick of a dreamer, but it might consume you. Reaching for the stars, you may need to leave your loved ones behind.

Expressions. Body language. Walking away. Sorrow. It all comes through.

And then it sort of ... just ends. The story wraps without being able to top itself. But by then it’s done enough.

Having achieved what you aimed for, you realize that there’s peace in just getting on with the job.