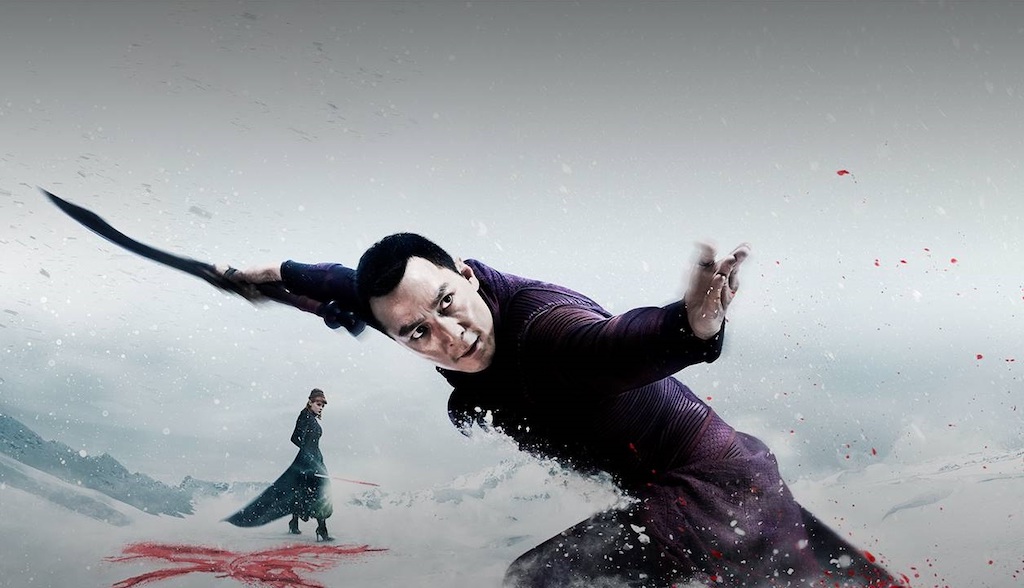 “Movie wonk me” insists I should not like Into The Badlands, AMC’s post-apocalyptic Chop-Suey Western.

The writing is shoddy. It introduces plot devices, then forgets about them a few episodes later. Characters’ power levels and willingness to kill fluctuate depending on what the script needs them to be. Enemies of some prominence in the world pop in only to get whacked right away, through what comes across as lack of show planning. It is the kind of writing where a character gets handcuffed, both arms behind his back, and stands there resigned... even though he only has one hand.

But then, it has got the best flying kung fu action this side of Yuen Woo-Ping ’s work in The Matrix. Between its flowing fight sequences and the buckets of blood it deploys, it feels like Yimou Zhang directing a Brian Yuzna production. Its design is dystopian wuxia by way of Karl Lagerfeld. It’s so manga; they even do the eye-visible-through-character ‘s-hair thing on episode 2.

Plus, it’s as unselfconscious as something this manicured can be. (The way everyone dresses, you figured there are three tailors for every poppy farmer.) A character can be lost, wandering through the rubble of our world, and find worn but impeccably fitting clothes that fit his preferred color scheme. It’s the sort of world where Nick Frost can use an octopus as nunchucks – with a straight face.

(Remember The World’s End, where Nick Frost being an action hero was a key joke?)

Sure, there is a plot. Our world collapsed for some initially unspecified reason. The Badlands, wherever that is, are ruled by Barons. In (once again) Mad Max-style, the Barons grudgingly collaborate because they each have things the other want. Marton Csokas’ Quinn, playing Discount Eastern European Kevin Spacey, runs the opium trade. Emily Beecham’s merciless The Widow controls the oil fields. Baron Chao’s family specializes in the slave trade (although the other barons still seem to have it as a hobby). The rest of the Barons do... something. It doesn’t matter. It’s background for why our hero, Sunny, a supernaturally efficient clipper (their word for indentured servants-slash-professional killers) under Quinn’s thumb, is having second thoughts and will (inevitably) end up wandering the Earth, Kwai Chang Cain-style. It’s all there to give us an excuse for some gorgeous combat.

Really. The fights are arresting, a thing of beauty. I blame the success of The Bourne Identity for why we ended up with decades of lazy close-up fight photography, where it’s hard to tell what is going on other than “punches being thrown”. Into The Badlands is a return to the craft of fight choreography, where you can not only tell where everyone is but what the space around them is like – which leads to combat that uses the environment in creative ways. This helps respect one of kung fu’s essential unspoken rules – the only weapon deadlier than your heirloom sword is an improvised one – and it means whenever it’s clear that people are picking a fight in an interesting environment, you get excited.

Yes, I’m arguing that a show is worth watching for the combat. The fact that the choreographers manage to sustain our interest and keep the fights fresh during 32 episodes is impressive.

It takes it a bit to find its footing. The first season gives off whiffs of “Game of Thrones, but on a budget.” Luckily they find their voice and choose to embrace their “bloody Journey to the West by way of Roger Corman” DNA instead. At about the same time, it becomes an equal opportunity horniness provider, with thirst-traps for every gender, ethnicity, and age bracket legally allowed. It realizes that the plot might be better served by having heel characters should stick around, so they slow down the antagonist revolving door.

Somewhere along the way, despite the janky writing and boatloads of clichés, you start liking these people. Not all of them, mind you. Some whiny turds remain whiny turds throughout. But characters have arcs (movie-wonk for “grow as people”) and, by and large, behave as you would expect someone in their position to – even when it’s not the nicest thing to do, and you know they will regret it later.

It didn’t last long, with AMC canceling it after three seasons. It’s just as well that it ended – the show had put on too much mythology too fast and the writing was coming apart at the seams. The cancellation seems to have brought some focus to the narration, and Badlands managed to wrap its story well, leaving behind a world that was over-designed but entertaining to spend time in.

So “movie wonk me” can stuff it. It’s not cognitive dissonance if you have different personas. The film purist can nitpick all he wants, but the persona who likes to have fun with fun things enjoyed Into The Badlands.