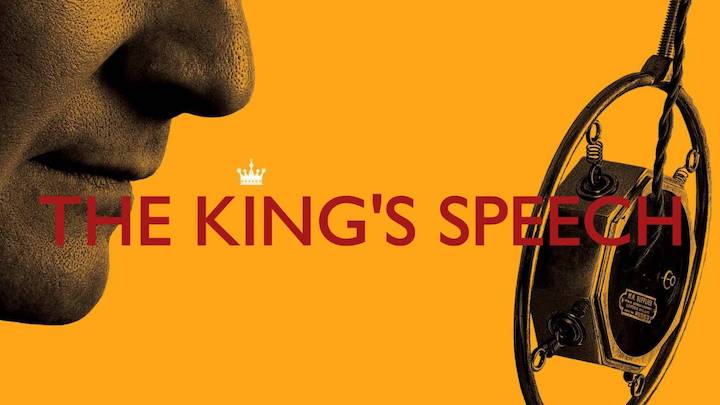 I'd have an easier time recommending Tom Hooper's The King's Speech if the strings weren't so damned evident.

In case you don't know (it's ten years old, and historical): Albert Frederick Arthur George, Duke of Wales, needs help with his speech impediment. Knighted doctors of the realm have tried to treat him with worse than medieval methods. His wife, whose name I don't believe they say out loud once, reaches out to unorthodox speech therapist Lionel Logue for help. Logue also happens to be a poor, egalitarian iconoclast, of course, but him and “Bertie” hit it off. There are a few bumps here and there, as class and nationality interfere, but the Duke of Wales, eventually King of England, comes to appreciate his commoner Australian friend (even if His Highness never apologizes for being a royal cunt).

Of course it raked in the Oscars. Best director, best screenplay, best actor, best picture. Colin Firth got both an Oscar and a Golden Globe for his performance as King George VI. It's the kind of tick-laden, showy part that awards love – like the one that got Geoffrey Rush his own Oscar playing David Helfgott in Shine.

And it's not bad. It's just so artificial, every bit there placed for effect. Logue's disregard for protocol and his off-handed send-up of the Royal Therapists. How much of Bertie's stuttering came from his dad's pressure. The requisite attempt that the establishment – made flesh in Derek Jakobi's Archbishop – makes at discrediting Logue, presented perfunctorily at the very last minute and just as quickly brushed away. Queen Elizabeth's stoic helpfulness. The ending note informing us that this was the beginning of a beautiful friendship. There isn't a single background prop in this movie that wasn't meticulously manicured, with a debate to analyze its potential audience impact.

Yes, it's a polished result, and it creates the intended effect, but it feels fake. Everyone involved has done better things, and it's this construct that gets a standing ovation.