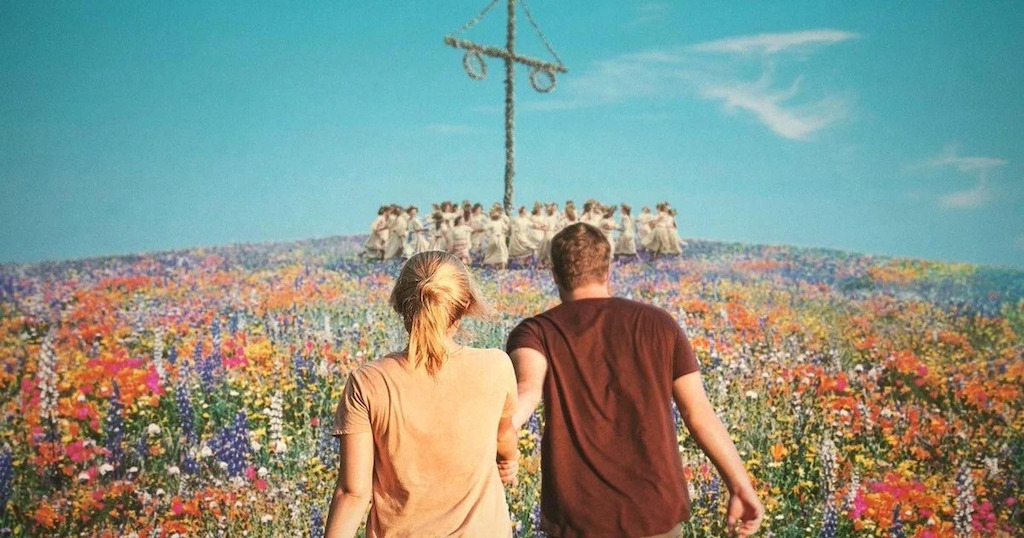 There's a moment in Ari Aster's first movie, Hereditary, where I found myself standing up, arms lifted as if to signal someone to stop, frozen. A few seconds earlier I'd been on the couch, enjoying what was evidently a slow build up to something, unsure about where this was leading. Then something happened. The tension had escalated, like something pushing metal doors forward, first just slightly bulging them, then bending, then stretching. The scene picked up speed, and suddenly, the force behind the doors grew, contorting them forward, and they exploded and released whatever was behind them. It happened in an instant. I, as a viewer, knew. The characters did not, not right away. I, however, did not notice I had shot up, instinctively, arms slightly raised and hands half-open, maybe to warn them, nor that it took me a few seconds before I realized I was still standing up, staring at the relative calm, waiting for the people in the screen to figure out what had happened.

Ari Aster's movies get classified as horror, because there isn't a better category. They have terrifying moments – Hereditary's last stretch is nerve-wracking – but his aim during the movie is not to shock you. Instead, Aster wants to unsettle you.

Midsommar is Ari Aster does The Wicker Man, and that should be enough of a warning.

No, not whatever was going on with Nicholas Cage's unintentionally hilarious remake, but Robin Hardy's 1973 classic of old rituals and sexual hang-ups.

Aster is clear about the template his story will follow. Instead of Scotland, he sets his story of foreigners visiting a pagan commune in Sweden during the summer solstice. This means we get scenes of casual horror and violence, wreathed in flowers and dressed in white, gorgeously lit against the midnight sun.

The four students we meet at the start – two from anthropology, one from psychology, and a fool of a friend – all accept the invitation having no idea what to expect. We do. They sleep in a communal house, its walls covered in murals depicting the cult's traditions. There are embroidered tapestries hanging around with pictorial instructions for love spells. Everything is spelled out around them. Their willful blindness is as much to blame for what happens to them as the villagers.

Midsommar's setting might be different from Hereditary, its scope wider, but they have a shared DNA. Their pacing, slow; their development, gradual; their sound design, pulsating and sudden. It cements Aster's status as the King of Family Freakouts and Legacies of Lunacy.

Midsommar, though, is not as tight as Hereditary, and the slower pace gives you more time to process the events. This has an unexpected effect: what happens doesn't feel as horrifying. Still, the fact that as viewers we start to become inured to the events might be the entire point. If the behavior can start to feel normal – expected, even – across two hours, what would happen if you grew up in that community?

By the same account, though, I don't imagine Midsommar will have the same staying power as Hereditary. I still flinch when I remember the latter's turning point, the moment that caused me to shoot up. I expect I'll remember Midsommar and grimace, but that my jaw will remain unclenched.

Still, if you are looking for something different, something that scratches a mental scab you have left alone for a while, Midsommar will gladly do it for you, and won't stop until you taste iron.