Radness off the charts! 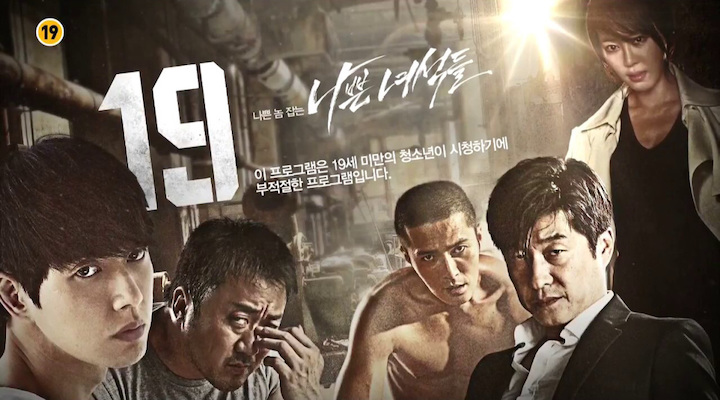 Am I done watching this one?

I think I'm done watching this one.

Bad Guys' pitch must have been “imagine the A-Team... but they're all evil!”

A cop gets killed in Seoul, chasing after a serial killer. On his own, for some reason, with just a camera-man following. Suicidal tendencies notwithstanding, he's not a random cop but a Big Shot's son, so this time someone does something. Big Shot asks Hard-Drinking Loose-Canon Cop to put together a team to deal with crime. The cops are too rigid-minded for criminals, so Loose-Canon hand-picks a bunch of criminals. They're supposed to compete with each other – whoever solves a crime or saves a victim first, gets time off his sentence.

Oh, and there's a token woman too, as a the straight-laced, stiff-necked official trying to keep them in line.

But wait, it's not that simple! Pretty boy might not be a killer at all! Assassin model has a heart of gold! Mobster... mobster... might be the only part worth salvaging!

The crimes they deal with are a teenager's idea of what would be both shocking and totally rad: they not only make no plot sense but might be physically impossible (a villain chops a body into 356 pieces with a knife). There is so much plastic surgery that if I blink while watching it, my ears smart. The soundtrack is perfunctory “cool guys doing cool stuff”. The only thing more bombastic than the dialogue is the camera work.

I lasted three episodes. On my defense, I was trying to get my ear re-accustomed to Korean. And I was drinking.