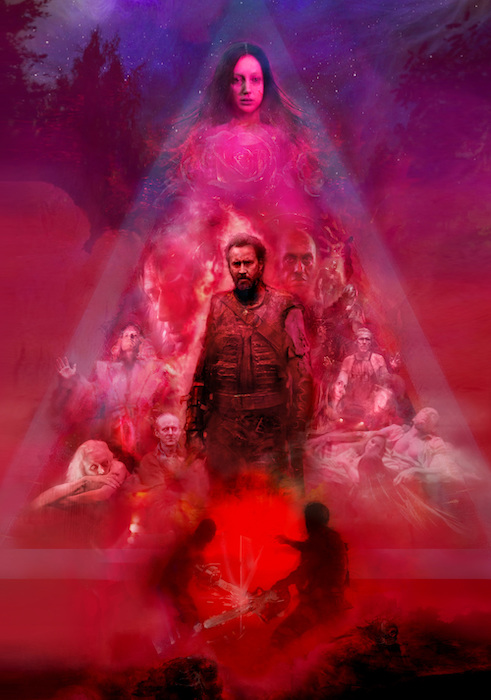 I saw Mandy early this year. I scribbled on my notebook as I was watching it, transcribed the notes a day or two later, then let the file sit in a folder for months.

I can put some of that on switching sites. I wasn't sure if I was going to continue writing but knew it wasn't going to be at Tumblr. When I started back in here, I had a long queue of things to get through (still do), and a discipline to rebuild (ditto).

Mostly, though, it's that doing one of these requires recapturing a movie's feeling, and with Mandy that feeling was a thick, oily unpleasantness I was in no hurry to taste again.

Mandy is what you do when you need to try heroin so you can hate it yet don't want to take the drug yourself, an electronic moving picture mix of William Blake and Richard Corben.

We can call it a revenge movie. Red Miller (Nicholas Cage, frantic, feral) lives in the woods with his wife Mandy (Andrea Riseborough, disheveled, doomed). The woods are both home and asylum, as both seem to have traumatic and violent pasts. There is peace for them in the mountains, but it doesn't last, as they get dragged into the libidinous machinations of Jeremiah Sand (Linus Roache, lascivious, languid), a Manson-like mix of charm and insecurity. When that is done, Red goes on a revenge rampage.

Anything I write could be a spoiler yet nothing could prepare you for how the movie feels when the plunger slams into the syringe and the movie turns into the bad trip version of an 80s metal album cover. Sex-obsessed cult leaders, redneck cenobites, mystical militia negroes, makeshift medieval weapons, and the Nicholas Cage-iest scene Cage has ever made, wading through a nightmarish miasma awash in red and purple hues, scored by Tangerine Dream's long-lost deranged twin.

It makes you feel dirty about having ever lost control, while simultaneously making it an alluring siren song.

It's memorable, it's well crafted, and it has some moments of pure gonzo. It will embed itself in your brain, which is both a recommendation and a warning.