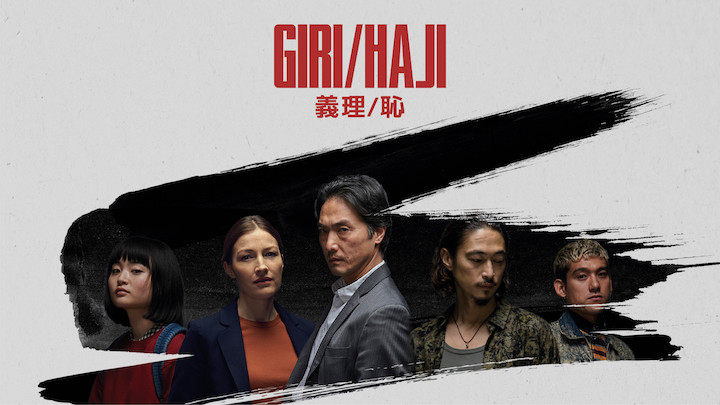 Giri/Haji is the rarest of creatures: a bilingual slice of life crime thriller series, like Kazuo Ishiguro doing a cops and mobsters story.

A Japanese executive is murdered in London. In Tokyo, a stern-looking man is shot to death at a restaurant, while he was examining the murdered executive's photo, the restaurant destroyed by the killers' automatic weapons. Kenzo Mori, a Tokyo police detective, gets a late-night visit from yakuza boss Fukuhara, who tells him that the London killer is Kenzo's brother Yuto, presumed dead years ago. Kenzo is a good man, an honest policeman, and he doesn't take orders from gangsters. Kenzo's boss arrives and confirms Fukuhara's instructions: he needs to get on a plane to London, ostensibly to attend a Crime Scene Management course, but in reality to retrieve Yuto and stop a gang war.

Kenzo can't defy an order, and he convinces himself that Yuto has a better chance of coming back alive if it is Kenzo bringing him back. He travels to London, begins his search, aided and hindered by the local fauna, getting glimpses of his brother's wake. Meanwhile, back in Tokyo, their family and friends deal with the aftershocks.

The sins of the son reflect on the family. You often know when they are going astray. You always wonder if you should help, if you should let them fail now and face the consequences, deal with the sudden pain, or if all they need is one last push to clean up finally. You always wait too long. Things always get worse than you expected. You had expected that the impact for you could be harder the longer you wait, but you didn't mean for the blast radius to expand. Neither did Kenzo.

Takeshiro Hira plays Kenzo Mori as if he was a young Ken Watanabe in a Merchant Ivory police drama. Reserved, tentative, but determined to bring Yuto back. Yôsuke Kubozuka is Yuto, the brother he has to retrieve. The story revolves around the two as they move through London, and a trail of second-hand death blooms behind them. They both do a great job of conveying who Kenzo and Yuto are, their family dynamics, the stubbornness they share, the sins that bind them. They don't just carry the series by themselves, though.

Kelly Macdonald, who after a fiery introduction as Diane in Trainspotting seemed to have ended up typecast as the mousy Scottish girl, plays to both sides of her career here. Sarah, her constable, relegated to teaching after alienating her co-workers, is a reactor of righteousness wrapped in a shy schoolmarm, quickly exhausted but primed for mighty explosions.

On the other extreme, you have Charlie Creed-Miles playing Connor Abbot, a loud, unruly gangster. You want to lick Creed-Miles' scenery-chewing performance off your fingers, even if Abbot is mostly an amped-up, less self-aware version of his Peaky Blinders' Billie Kimber.

Then there is Will Sharpe playing Rodney Yamaguchi, the one who grounds us, the poor frog trying not to get trampled as the bulls fight in the mud around him, its poor impulse control keeping it too close to the fray. Rodney, son of a British and a Japanese, who could have been a two-note tragicomedic buffoon and walking metaphor. Sharpe's unsettled, frightened performance imbues Rodney with an inner life, aided by a script that insists on reminding us that even small actions can have outsized consequences.

Because everyone does a spectacular job with the parts they get, but it's Joe Barton script that deserves the most praise. It balances two countries and languages, a dozen characters, multiple parallel stories and motivations, and bundles it all up into eight coherent, thrilling episodes. And then, before it lets you go, it unleashes one of the most beautiful, lyrical, unexpectedly tense moments I have seen on a TV series, much less one with a neo-noir theme.

If only we could get more series like it: actual attempts at crafting the best possible story, not just another content hamster wheel to keep customers from canceling their streaming service.

It deserves to succeed, and I only hope its success ripples out.