The wrong kind of stupid 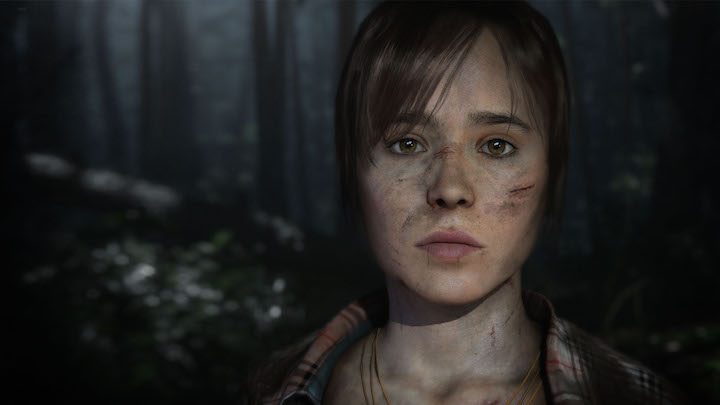 Why am I bringing that up? David Cage's “games” give the player so little agency that I always wondered why he didn't just up and make a miniseries in the first place.

Beyond Two Souls answers that conclusively: it's because his writing is ludicrous, even by late 90s TV standards. If I wasn't a strong believer in personal freedom, I'd say he shouldn't be allowed anywhere near a keyboard.

So this girl Jodie grows up in a military base somewhere in the U.S. It's a covert research facility where you don't want anyone to know what's going on. The secretive type, where you emblazon the name United States Department of Paranormal Activity in a gigantic seal covering the entire lobby. She has a connection with “an entity” which, effectively, means that as a player you get to play through out of body experiences and push things around.

But it's a government project, so of course they intend to use her as a spy/weapon. She goes straight from her child/teenage years at the base, to CIA training montage as an adult, to covert ops where of course the CIA lies to her, to wandering the Earth before she needs to come back and clean up the military's mess.

By “goes” I mean “you have to push her slow-moving stiff automaton of a character around”. Her body is a crawling cursor that you need to use in 3D space to get to the next action prompt. It's as if David Cage had looked at visual novels and thought “that's OK, but wouldn't it be more fun if it took a few minutes of geometry-bumping and camera-wrestling before you could continue the scene?”

And that dialogue. By Tarantino, that dialogue. It takes a special kind of writer/director to make Willem Dafoe come across as a bumbling daytime TV soap-opera star. Imagine a kid who grew up thinking his crayon scribblings were high art because mom kept sticking them on the fridge, so he never tried to improve. That's David Cage's writing.

It has a couple of moments. The story is all vignettes from Jodie's life and there are exactly two in them that actually work as a game, with decision points which have you ask what kind of person you are. The game also still tells you a story if you fail at a task, instead of having you restart a scene.

These are wallpaper trying to hold together a termite-chewed, badly-hammered-together structure. The vignettes don't disguise how disconnected the tale is from your actions or how little effect you have on her actual story. Continuing the scene even if you fumble an event doesn't ameliorate how obtuse the game can be at what it expects you to do at critical moments.

Most story choices, though? They're of the “should I do a wailing teenage guitar riff or just throw a different type of hissy-fit?” variety.

Most game sections? You're on rails, with your actions having zero impact on the story at large, the scene itself, or Jodie specifically.

David Cage doesn't get how either of those things work.