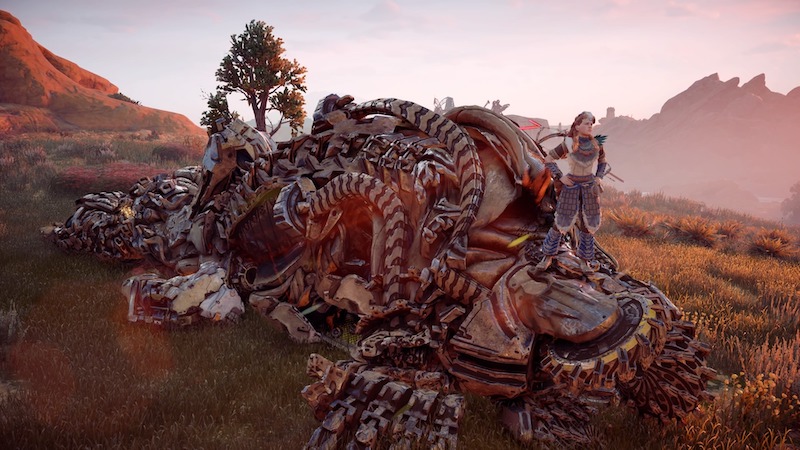 There's a character you meet early in Horizon: Zero Dawn called Teb. He is a boy, just a teenager, who slipped off a cliff and fell into a valley full of animalistic machines. The machines are calm, because they haven't noticed him, but will turn savage and attack the moment they sense a human.

Your character, Aloy, wants to help. Rost, her mentor and surrogate father, stops her. She's just a child, he says, not even as old as the boy she's trying to save. The boy has only a hurt leg, but there are too many machines around. Soon one of them will notice him and they'll trample him to death. There's nothing she can do.

Aloy runs off and you get to rescue him, of course. It's the sort of thing one expects the heroine would do.

The story skips ahead a few years shortly thereafter. The next time we see Alloy she is a young woman, in her teens herself, eager to prove her worth at a tribal contest.

You've played enough of these things. You know where that's going. Teb is going to show up again. He'll be the Designated Older Male, inspired by Aloy to become a better warrior, who will trail her through her quest to repay the favor of saving his life, who will become the Requisite Love Interest.

It's a trivial spoiler to say that he is not. His experience with the machines and Aloy taught him that he was no warrior material. He is a tailor, making clothes and keeping close to home while supporting others with the leatherwear he makes.

Over and over, Horizon: Zero Dawn's story upends narrative expectations. Turning around tropes is easy enough – you just figure out whatever the majority would expect and go the opposite way. Horizon does it the hard way: making its secondary characters feel like actual people instead of being anthropomorphic plot dispensers. You deal with sexism and racism and xenophobia. You meet an Empire that is trying to get above its bloody past, climb the ruins of the old world, hear about it from the (recorded) mouth of some people who lived in it. It's a gorgeous world which feels like a living place, an ecosystem populated by fiberglass and metal instead of fur and feather.

It's a lovely story, but you need to spend most of your time in the repetitive game.

Horizon: Zero Dawn's core gameplay hamster wheel is so polished that it takes a while to notice that you spend most of your time running in place. You fight machines, get parts, craft munitions out of them, fight machines in corrupted zones so that an area is safer, trade parts for better weapons, climb a stunning walking tower to scan the area so you can find more machines to fight. The core game quests tell you Aloy's story, the side quests flesh out the world, and the fact there's a section named “Errands” tells you everything you need to know about its third category. Its dialogue is delicious, its writing on par (and often above) that of The Witcher 3. The core game loop can give off whiffs of Dragon Age: Inquisition tedium.

The game is still a delight. It holds up a mirror to our own society's tribal thinking and sectarian squabbles. It features a strong, smart woman who keeps teaching those who judge her by her genitals how far they are from the point. It's a perfect showcase of gaming best and worst traits, and how we can both entertain and set an example, without preaching or forcing the player to agree with your politics. Its bushels of errands are worth putting up with, so you can get to the places they lead.