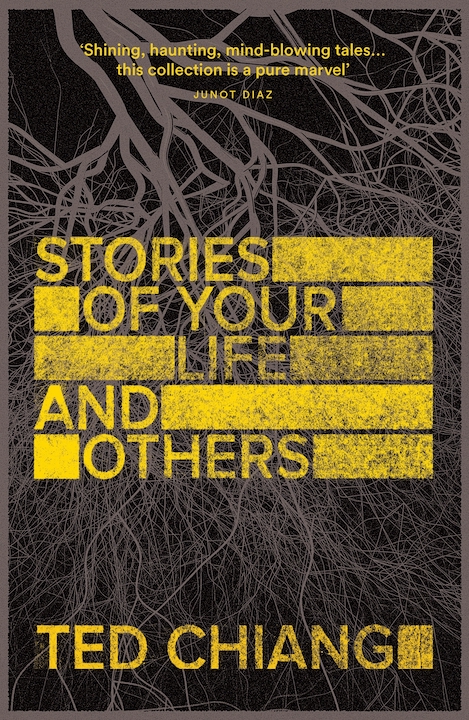 A lot of dystopian stories posit variations on a Mad Max world where marauders roam the wasteland. That’s a kind of change no one wants to see. I think those qualify as doom. What I mean by disruption is not the end of civilization, but the end of a particular way of life.

You have got to squint to see Ted Chiang.

You could give me a random markdown file with a story, and I could tell if the writer was Peter Watts or Robert Heinlein or Vernor Vinge. As authors, they have distinct voices, styles, concerns that come through whether they are writing about the near-future or post-singularity, fantasy, or body horror. Most would take a few paragraphs – Iain M. Banks might take a chapter.

Not Chiang. The most impressive thing about Ted Chiang’s intricate collection of beautiful (and mostly) science fiction tales, Stories of Your Life and Others, is how muted Chiang himself is.

You can see the connecting tissue, mostly in the concerns, but Chiang is a writer who lets the characters and situations speak – you don’t hear him nearly as much.

It’s an eclectic collection of themes. Among them:

They are filigreed little things, littered with minutia, much more solid than they first appear. Every story in this collection has a distinct voice – Chiang doesn’t have a single one. Nowhere is this more evident than on a “documentary transcript” about how we manipulate each other with beauty. Multiple talking heads bob in and out of the story, each one with their manner and concerns.

They all share a few traits, though. Mostly, the focus on getting back to science fiction roots, when the stories weren’t supposed to be about the gadget but about how the gadget changes us. It’s not just all business and sociology, though – Chiang manages to sneak in jokes about such varied things like histocompatibility genetics – but they are all about the social implications, how things changed because.

Plus, there is a brief afterword, with notes about where the stories came from. People always ask writers where do they get their ideas, but nobody wonders ever asks how for how long they had to work at getting them right. If the details on the stories themselves did not leave it clear, the afterword would cement the impression that Chiang takes a while to let things percolate and edit them so that they are just right. Or, more importantly, so that he is satisfied with them.

With this meticulous attention to detail, it is no surprise he has published only a handful of tales in the last 30 years. It was surprising, however, learning that even after Arrival he is still working as a technical writer. I shouldn't have, however, considering the respect for the craft his stories shows. While the rest of us expect the ideal gig and complain about how shitty our managers are, he just wants to produce something he is happy with, however long it takes. Even if it means holding up a day job.

It took Arrival to make me realize why I like Dennis Villeneuve, beyond his just putting out good stuff. His movies are smart, but unlike Christopher Nolan's work, they don't feel the need to rub your face on how clever they think they are. It's cerebral, without being boring. It's engaging. It neither expects the viewer to be a beer-can-forehead-crushing baseline nor thumbs its nose up at those who don't worship at the shrine of Iain M. Banks.

If you like science fiction movies and know that means more than fighter planes going pew-pew at aliens, watch it.

The trailer below is safe. Others I've seen give away too much of the movie's structure if you have an eye for those things.

Arrival is one of those rare layered movies. Normally that would be film-wonk-speak for “more to it than meet the eye.” Arrival does one better, and truly has several strata that you eat through and appreciate, either as a whole or independently.

You can savor the spongy cake of the human drama, with characters attempting to deal with a stressful, drawn-out situation while wrestling with their own problems.

Then there's the crunchy science-fiction base. I'm not going to go into it, to avoid spoiling the themes that will come up, other to say that it's the first time I've seen the Sapir-Whorf hypothesis show up in a mainstream movie.

You can crack them open and taste the thin political coating in the middle, so slight that you might miss it, where scientists attempt to cooperate while their governments decide to puff their chests and act like gorillas playing the prisoners' dilemma.

Or you can take a spoonful of all three. Each layer empowers the others. The themes on its science-fiction foundation are not delved into too deeply on the barely-two-hours they have, but (if I can mix my metaphors) they are the bones and tendons that animate the drama's body. Without the drama providing a human face to it, all you'd be left with is an unsightly calcium structure prancing around, reading Wikipedia pages to you out loud. And without politicians being politicians, events would have no reason to unfold the way they do.

Villeneuve has turned out to be what I expected Christopher Nolan would become. That's not a dig on Nolan – I've done that enough. It's just straight-up praise for Villeneuve.

Published initially on my old blog