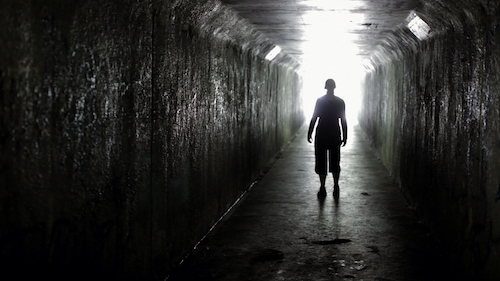 We had a Viewmaster when I was a kid. It was this small, orange-red plastic thing where you inserted a cardboard disk, then you could see stereoscopic images. You were looking through it at a light, and the images had this vivid, three-dimensional quality that's impossible to achieve with just projection. We only had a handful of disks for it, but I think they were all kid's stories.

The one that I vividly remember, because it terrified me, was Three Billy Goats Gruff.

I remember the bridge, the bloated troll hiding under it, the terror that each goat might be eaten as it crossed over, but mostly, my disbelief as a child about the strategy that the goats were seemingly using to save themselves.

Mike Flanagan's Absentia tells you where it's going right at the start, when broadly-drawn former-junkie problem-child Callie shows up at her sister Tricia's house carrying, among her meager possessions, a copy of Three Billy Goats Gruff.

Tricia's husband has been missing for seven years, and she's wrapping the paperwork to declare him dead in absentia. In walks Callie, setting up a predictable confrontation between the reliable sister who has managed to maintain a house by herself (and is gearing up to be a single mother) and the nomadic rebel with the crazy ideas. A confrontation that takes too long to appear, since Callie is busy hallucinating about her husband... and her (never quite explained) discomfort at dating someone after her husband has been gone for almost a decade... and Callie is dealing with some oddball tunnel behavior.

Mostly, it takes a while because Absentia is busy getting all tangled up in its mythology, and trips a few times before the end.

It's less disciplined than Flanagan's more effective Oculus, and thus, less tense. It's funny to think that even though it's the smaller budget movie of the two, Oculus is the one where he seems to have focused on the script more, honing it until the edge itself could strike fear into the characters' hearts. But Absentia was made a couple of years before, and to his credit, he seems to have learned from it.

Gotta say I like the look of his movies. They seem homemade, like they were put together for $200 among a group of someone's friends, or people who answered a newspaper ad. When the movie works, like in Oculus, this lends it some verisimilitude. But when it doesn't, it makes them look amateurish.

It does have several things going for it. The unsettling way in which her dead husband integrates himself into Tricia's daily life, reminiscent of the ghosts in the Pang Brothers' The Eye. Doug Jones, wearing the least make up I've ever seen him wear, with a young Anthony Perkins playing his kid. The fresh mythology. A perspective switch that made me stop and clap.

Absentia is but a chrysalis for something better that never finishes emerging during its run time. That better creature, however, is gradually coming out on Flanagan's other films. He hasn't yet shown the raw, focused talent of a young John Carpenter, but he seems determined to make up for it with constant improvement.