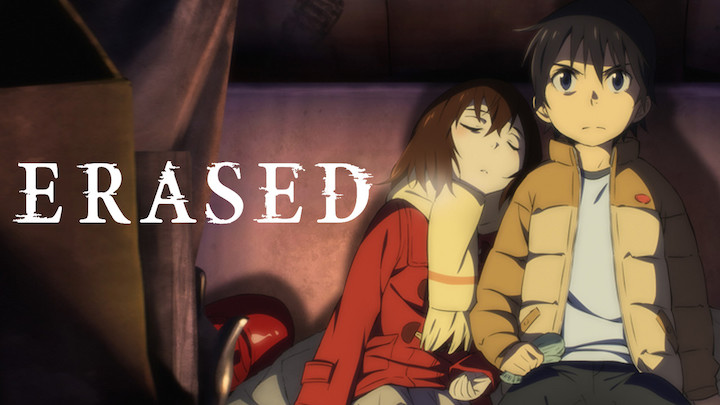 Erased’s Satoru Fujinuma works a day job as a pizza delivery man while struggling with his attempts at a wanna-be manga artist. He doesn’t share much with others, which his editor thinks reflects on the manga he writes and stops him from connecting with potential readers. At 29-years-old, his career ebbing away from him, he seems a teenager whose gap year before college extended to an entire decade. He is thoroughly unremarkable, other than the fact that he sometimes jumps back in time.

It’s not exactly an ability. Satoru can’t control it. It’s more something that happens to him, like everything else in his life. It always happens before an accident, a disaster, or another event with negative consequences, giving him a chance to prevent it. But since there is no warning, and it happens before the event takes place, Satoru doesn’t know what the trigger is. He finds himself yanked back, déjà-vu-ed a few minutes to the past, the needle skipping back. The moment he notices the jump, he frantically searches for a sign of something wrong, something he can affect, something he can fix. It resolves quickly, cause and effect apparent the moment he spots what’s wrong.

Until the time where a catastrophic shock sends him back eighteen years, to the time when he was in school, and somebody murdered three kids his age – two of them his classmates.

That “somebody” officially was an older friend of Satoru’s. Satoru never believed it. He sets to not only clear his friend’s name but also to prevent the murders. Yet he barely remembers the case, because adults at the time did their best to hide the grisly details from children like him. How can he act, trapped in a 10-year-old’s body, stuck in school, unable to explain to anyone what little he knows?

Erased avoided easy plot solutions, confounded my expectations. Not entirely, mind you. They only have so many pieces, and only a few of them would fit some areas. You can glimpse the edges of a pattern emerging, but like Satoru, you can’t always see the whole design.

Yes, I tend to favor shows that surprise me, but surprise is a quality that’s in short supply when you’ve watched as much stuff as I have.

That by itself would be enough to recommend it, but *Erased *’s characters grow on you, become something more than puzzle pieces for you to fit. And when they do, you start worrying about them, concerned about how Satoru’s actions to save one of them might pinball around and affect the others.

Everybody wants a do-over. Satoru gets one. He may not like the effect of the choices he has to make.

There is a grasping at father figures, rediscovering friends through your older eyes, the nostalgia for those innocent days when everyone was in sync. Yet Erased also has something else on its mind, which we glimpse as we see Satoru stumble and gasp and stutter when he is in his much younger body: we grow upwards, but not always up. A lot of us are just children, stuck in older bodies, never having figured out what happened in the time the age counter increased and expectations piled up. Satoru, looking at his friends again, has to realize that age doesn’t imply maturity and that he can’t succeed by himself.

There is a striking amount of tension in watching children doing child-like things to help each other escape an unseen threat.