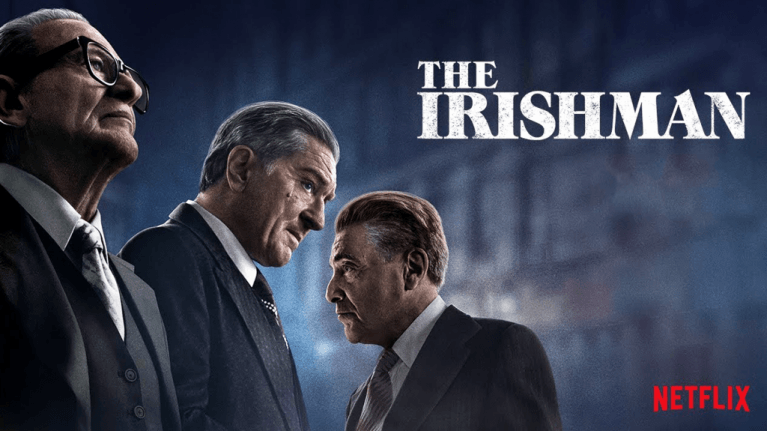 I gotta level with you here – I'm not sure why y'all are going crazy over The Irishman. It's a competent movie, but you wouldn't expect any less out of Martin Scorsese. It's also over three hours long, and it feels like it.

Let's get the faint praise out the way.

This is the kind of movie Scorsese can do in his sleep, and he stays within the quality parameters he has taught us to expect. One can't say the same of everyone else involved – both Pacino and De Niro have put out buckets of mercenary dreck in the last couple of decades. They perform well, though, as do Joe Pesci and Harvey Keitel with what little they're given. The de-aging effects do their job and mostly don't call attention to themselves. De Niro's character, for once, is a mere foot soldier who keeps a narrow view throughout, with the script never falling for the trap of making the movie about his rise through the ranks.

Yeah, lots of “showing up to work on time” up there. If The Irishman had been made by a novice director, working with an unknown cast of elderlies and a large special effects budget, nobody would be throwing Oscar nominations at it. At best, it would have gotten comments calling it a promising first effort and a Scorsese pastiche.

If it wins Best Picture, it's going to feel like it was a Lifetime Achievement Award that happened to come with a movie attached to it.

Here's the most fascinating thing about it, though: even though it's a good old-fashioned film which Scorsese could have made at almost any point in the last 25 years of his career, The Irishman exists in the exact way it does only because of this specific moment in media.

Catering to the long tail only lasted Netflix so long. It was ideal for bootstrapping, back when they started, giving you access to every existing video library they could get their hands on. If you were interested in watching or re-watching something, they wanted you to be able to find it there on a whim.

Once Netflix proved that would work, others rushed in, and a movie right turf war started. Netflix, staffed and ran entirely by smart people, realized that original production was going to be the new battlefield.

Now every competitor out there is throwing billions a year at creators and licenses, scrambling to get unique content that keeps people from canceling for just one more month.

It turns out, nobody in Hollywood wanted to back another Scorsese-De Niro joint. Nobody but Netflix, who seems to have told him to knock himself out spending $175 million.

And so we get a kitchen-sink kind of movie. Scorsese gets to hire everyone he ever enjoyed working with or hadn't been able to afford casting on a single film. De Niro and Pacino starring? Sure. Joe Pesci and Harvey Keitel in bit parts? Why not?! Millions in de-aging special effects, so that the septuagenarians didn't have to wear motion capture hardware? Go ahead! Hiring Anna Paquin, an Academy Award winner, to show up in the background a few times, say six words, then disappear? Hey, at least we don't have to de-age her.

I shouldn't complain. I'd rather companies spend their money on money actors and writers and directors, not Superbowl commercials and summer PR campaigns. It's a mad scramble for talent and at least we get new movies that would otherwise not get funded.

I worry, though, that having production houses too willing to overpay will get creators fat and snug. We've seen enough of that in other areas where indiscriminate investment rushes in – entire generations of entrepreneurs, spoiled because they happened to start during a massive boom, getting rusty on comfort too early.

And then there's also that this money is going to big, recognizable names. There are only so many Scorseses and David Lynches and Finchers to go around, so better scramble for them now and worry about fostering independent talent later, maybe.

Netflix got the pendulum to the end of the long tail and then kicked it back, hard. Everyone now cares mostly for the fat head of the mass market again. I suspect we're about to enter an age of cultural gray goo, every service generating shades of the same content with slightly differentiated big names, everybody discussing the same two series at the office.

It's going to be a winter for original content. Discovery is about to get bad. It's time to start stocking up on original creators, subcultures, experimenters, before you get snowed in and can't even find them on a search. Best get ready to hibernate.