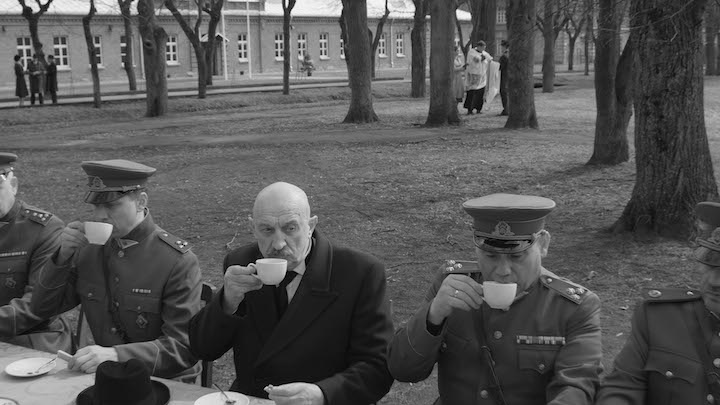 It takes a while to find out what Karolis Kaupinis is trying to do with Nova Lituania, his first feature film unless you have the historical context. It isn't clear if he's parodying a difficult time in his own country, creating alternate history, or just making a tragicomedy about the unlikely friendship between hangdog characters.

If you know about Lithuania's first president, and his actions around the time that the country got carved-up between Germany and Russia, seeing the country's leader posture and proclaim about their strength provides some dry amusement.

If you know the actors playing two of the main characters are – in Kaupinis' word – “choleric”, then seeing them play their muted weaklings adds to the entertainment value (like watching Nicholas Cage play a meek Franciscan monk).

If you know that there was indeed an academic arguing that Lithuania needed a back-up landmass in case of an invasion, where they could restart the country with intellectuals and bureaucrats, who would “build it right this time” and entice the diaspora to move there, then you know how to take his particular monomania when it comes up.

If you don't... then you will spend a long time trying to figure out the details behind this particular bit of droll inside baseball.

Those of us who grew up in less-than-developed countries can relate to the oppressiveness that comes through on the creamy black-and-white photography and tight angles, to the frustration of popular incompetents always getting ahead, but will have a hard time getting beyond that. Kaupinis seems to be attracted by absurdist realism, judging from what he said about his next project. Nova Lituania, sadly, is neither absurdist nor realistic enough to connect with the layperson.