It's hard to dissect Quentin Tarantino's latest, Once Upon a Time ... In Hollywood, without going into anything that would spoil some aspect of the movie, so read after the image at your own peril.

Short summary: the performances are sensational, there's a lot to love in it, but the movie never comes together and feels like a rambling, improvised in-joke, where if you know the guy who's telling it you can tell where he's leading, but you're still going to have to wait for almost three hours for him to get to his punchline.

I want to love it. I was mostly entertained by it. But it's a bit of a mess. 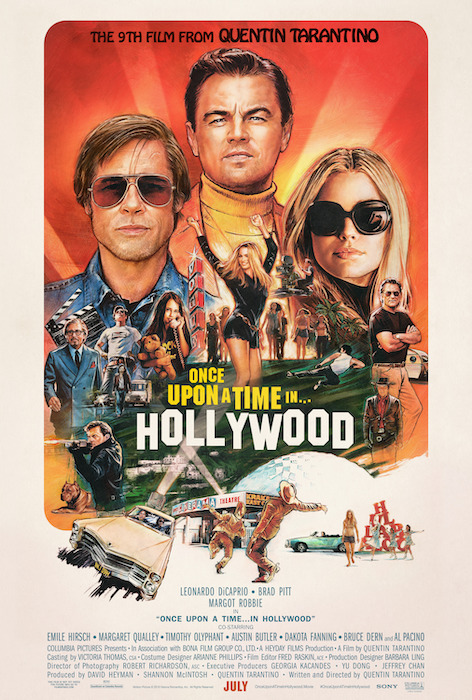 Let's first get the negative out of the way.

In the odd chance you didn't know, Hollywood is set around the Tate Murders. It's not about Sharon Tate – not for the most part. It's about washed-up TV cowboy Rick Dalton and his stunt double and rent-a-friend Cliff Booth. Tate features prominently from the start of the movie, though, including a voice over introduction by Damian-Lewis-in-a-wig's Steve McQueen, as does her friend Jay Sebring who was murdered alongside her. Manson's family also keeps popping up, even if Charlie himself only shows up briefly.

If you knew about the Sharon Tate murders, and you know what Tarantino pulled on Inglorious Basterds, then you know where this is going the moment you find out that Rick Dalton lives right next door to Tate and Polanski, and that Cliff Booth can handle himself in a not-so-friendly contest against Bruce Lee.

If you don't... then Tate, Sebrig, McQueen and all the rest being there probably won't make all that much sense to you. They have no place in the movie other than as a lure, to give us a hint of where this circuitous exploration of lates 60s film production is going to end up.

There's two ways this could have gone and worked. In one, Tate is a key part of the story and we spend our proper time getting to know her. On the other, it's not about her, either because she doesn't matter or we know who she is, so we can skip over the boring bits. The latter is what you do if you expect that we're all in on the joke.

If we are already in on the joke... well, then... just keep the story focused on Rick and Cliff, whydontcha.

With all this narrative meandering, we end up in a situation where the performances are sensational, but the movie never gels.

Leonardo DiCaprio is impressive. He plays the part of a washed-up burned-out drunkard former star so well that, in a scene with Timothy Olyphant, a stiff actor who barely has a single face to show up with, DiCaprio manages to make Olyphant look like a natural performer at ease with his craft.

Margot Robbie is a delight as Sharon Tate. She's in it for no particular reason, and she isn't in it very much, but when she shows up, she glows. There's a lovely little scene when she's sitting in a theater, watching herself in The Wrecking Crew, where she comes across as an overgrown girl excited about how far she's gotten.

Brad Pitt is in it. His effortless cool must take a lot of effort. His best scene – drunk, in a boat, half-ignoring his wife's angry ramblings – is gone in a flash. He seems to be having fun.

Oh, nevermind. I forgot. Almost all performances are great.

Why is Al Pacino even in here, sucking the air out of a couple of scenes? Unlike others playing bit parts – Kurt Russell, Michael Madsen, Zoë Bell – he's not even an in-joke for Tarantino fans. But Quentin had never worked with him, though, so why not throw him in as well?

Because Tarantino is running wild and the movie suffers from it. It's so self indulgent that it feels like half the movie are ladies’ feet.

Which is sad, because I'd actually recommend Climax and The Naked Director (which I've yet to write up) as stories where the theme of running wild is the fuel that the movie burns, but the movies themselves are better for their restraint.

Sure, create for yourself. Throw a foot close-up here or there.

But if you are a chef, you cook not only for yourself but for your diners as well. Hollywood has all the right ingredients, and Tarantino managed to wrap it up with a violently amusing desert at the end, but the courses before it were all bunched up, piled on top of each other, as if he couldn't decide what to serve and what to leave out. Most of the flavor ends up washed out.