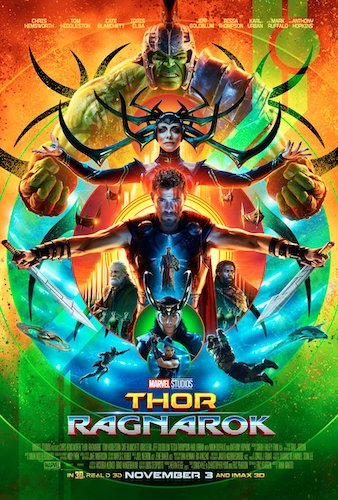 Kenneth Branagh turned down the chance to return to Thor: Ragnarok so he could go star and direct on an Agatha Christie remake.

It's better off for it.

The result is hilarious. Particularly for a movie that starts with an elderly father dying of neglect, then moves straight on to a military purge.

I don't think Branagh could have pulled it off. It would have been one of his over-designed mixes of too many ingredients which ends up tasting like nothing in particular.

But on Taika Waititi's hands... It's such a breezy cocktail.

How much of it did they improvise? Because for a special effects-heavy movie costing almost a fifth of a billion dollars, it sure feels like a bunch of friends hanging around in costumes and shooting the shit.

Cate Blanchett's oozes all over the scenery with her luscious turn as Hela, playing one of the very few memorable villains in the entire Marvel series. Jeff Goldblum's Fussy Evil Bureaucrat, The Grandmaster, is delightful. Tessa Thompson manages drunken ultra-violent slapstick as Vaklyrie. Karl Urban juggles comedy and conflict as a cowardly Asgardian crony. Tom Hiddleston does the Loki shtick he can do while hungover and suffering from migraine. Chris Hemsworth's Thor is an overgrown puppy in a room full of your crystal, with Mark Ruffalo's Hulk being an indestructible straight man. Clancy Brown's self-importance as the voice or Surtur got more laughs out of me than entire other comedies, even though his part is an overgrown cameo.

This is the Marvel Universe's The Adventures of Buckaroo Banzai Across the 8th Dimension. If only they could have fit in Peter Weller too.