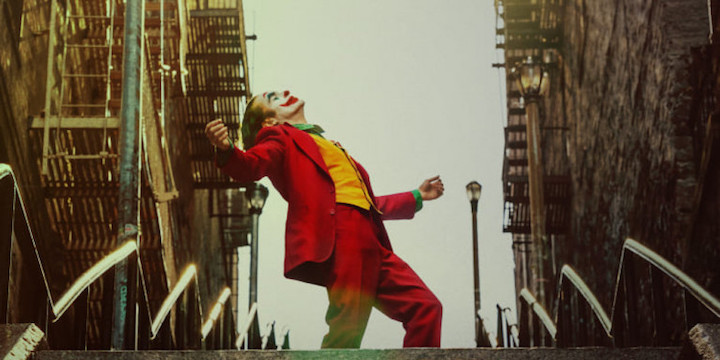 You know what it's supposed to be about, right? It's an origin story for the Batman villain Joker. In an attempt to distance itself from the recent tire fire of DC movies, director Todd Phillips chose to ape a late 70s style (down to title cards). Unsure if that would do the job, he then went ahead and namechecked a few Scorsese movies while promoting it. It's like Taxi Driver! No, King of Comedy! Look, De Niro is in it as an asshole talk show host!

But it's topical, too! Arthur Fleck – Joker's original identity here – got nothing but shorts sticks. He is poor. He needs to care for his mother based on his irregular income. He has mental health issues. They live in a city that is cutting back on social programs and which is crawling with entitled rich.

You don't need to be a movie plot taxonomist to know what the rest of the movie is going to be about. Our lack of empathy created Joker. He is a monster, but one we created ourselves, blowback for America's disregard for those most in need, the inevitable result of its depraved cannibalization of the bottom 99%. If only Batman's dad had put his money into helping society instead of his political campaign, maybe Bruce Wayne would be a regular spoiled rich kid instead of a brooding superhero.

On the nose enough? No? Then let's make Joker's war cry you get what you deserve!

It's a cheap ploy to appeal to people who wouldn't watch superhero comics, engineered to induce knee-jerk sympathy for a character with zero redeeming qualities. Nevermind that Fleck's first murder spree happened before an uncaring system cut off his medicare. Those guys were asshole venture capitalists; they had a few .38 rounds coming, right?

It has one thing going for it: Joaquin Phoenix commits to the character with absolute dedication, giving a performance that is beyond what the material deserves. Some of it comes from the Christian Bale school of “body transformation as characterization.” The way Fleck retreats into his own space when he isn't acting on his clown persona, the awful awkwardness when he believes he is faking smoothness, the pained expression when laughing... that's all Phoenix. He doesn't manage to sell us on the movie's own pretensions of depth, but damn if he doesn't try.