Who you are is what you create 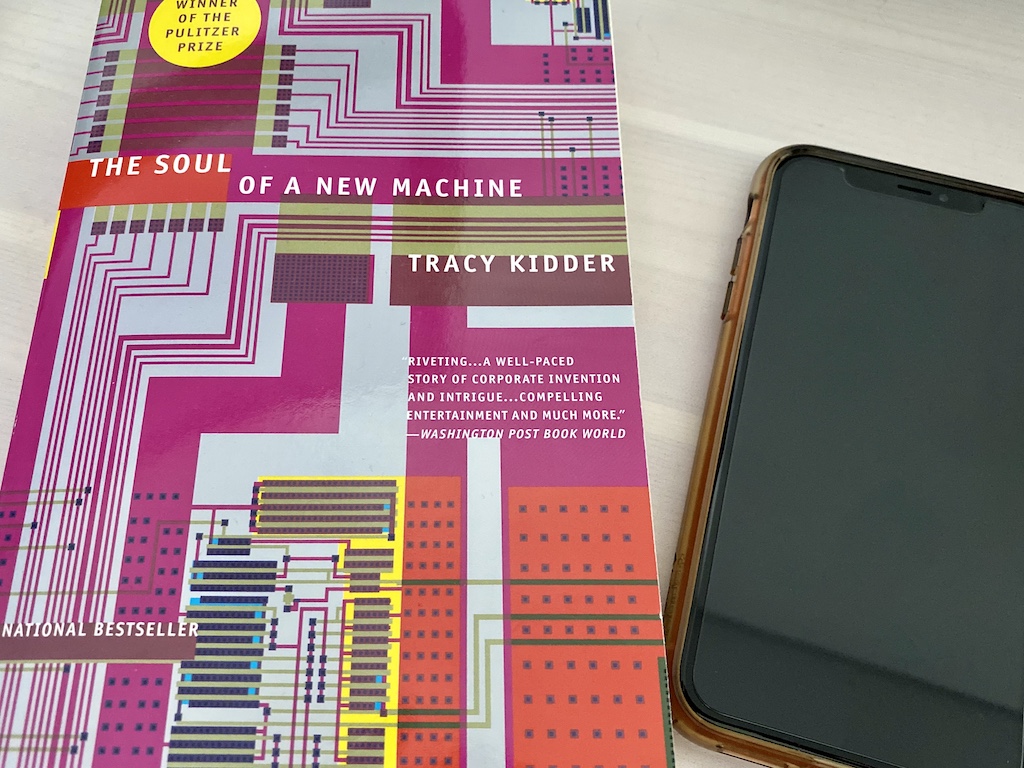 The most striking thing about Tracy Kidder’s 40-year-old The Soul of a New Machine is not how well it holds up. That is a remarkable achievement by itself, consider its age. It chronicles the efforts to build the “Eagle”. The Eagle was a commercial computer, which at one demo has 128 terminals wired to it, and which fully-loaded didn’t have enough RAM to store an iPhone screenshot. Its processing was split among seven different boards wired together because miniaturized chips weren’t feasible yet. No description involving any of this has any right of holding up, and still Kidder manages.

The most striking thing about it is reading it now, decades later, and realizing how many of the lessons we knew back then we keep forgetting.

I’ll get back to that.

It’s no surprise the book is good – it won a Pulitzer Prize for Non-Fiction. But it is a writing masterclass in at least two ways.

Tom West, someone who we expect will end up being our lead character, appears first on the sensational opening. We don’t talk to him, nor do we hear him speak much, but we see how others who don’t know him react around him as they are all on the same literal boat, in the middle of a storm. Then the book moves onto giving us a half-tour half-montage of the minicomputer industry in the 1970s, telling us about feuds and founders and fortunes being minted, talking about everything and anything other than our mystery man, before dropping him into the story again on the very last line of chapter 1.

It’s a beautiful, enthralling opening that sells you on the rest of the story right away.

The second way in which its writing is exemplar is how thoroughly researched it is. That Kidder takes his time with character is not extraordinary, but I’m surprised at his clear-eyed descriptions of things like the process of pursuing and removing hardware bugs. Kidder is a reporter, not an engineer, yet he describes hardware processes better than many experienced engineers I know. As he goes on to detail how, say, a CPU loads and evaluates instructions every time a billionth of a second ticks by, you get the impression that Kidder asks questions and doesn’t stop following up until he is satisfied he understands the answers.

And yet, that's all silicon, and a golem is nothing without a soul. Melvin Conway proposed in 1967 that any organization designing a system will produce a design that embodies the same organization’s communication structures. We get a preview of this early on, as Tom West disassembles the VAX – a competitor’s much-touted computer – and finds it wanting. It is complicated, expensive, involves too much protocol. West seems to disapprove that DEC was playing it safe.

His team, we feel him think, will do better.

The people that would end up becoming the Eagle team are the leftovers of a corporate move, an underfunded, understaffed eclectic collection that West starts pulling into his “insurance project”. West can’t throw money at the problem – hell, he can’t even order people to join his team. He needs to find ways to get them to “sign up”, to sell themselves on the idea that this project needs to succeed.

It’s the old Shackleton expedition apocrypha, but in an overcrowded basement.

Yet he succeeds in gathering a band to breathe life into this amorphous creature. The people he gathers say they don’t do it for the money so often that you start thinking that the engineer doth protest too much, even more so considering current day tech salaries. To all lights, they weren’t paid that much. These are not the current day spoiled millionaire engineer brogrammers. They’re not even the company stars – those moved to a new office at the start of the story, to work on Data General’s main project.

How does West do it?

He provides agency, freedom to invent, and a sense of shared purpose.

Tom West has little else to offer other than absurdly long hours, impossible deadlines, and a project that management itself doesn’t seem to believe in. But he creates an environment in which his engineers are allowed to roam with few constraints.

Do you want people to push themselves to achieve an unlikely goal? You set only a few gross parameters at a high level (“no mode bit!”). You then move decision making to the organization’s edges, to the boots on the ground who have the knowledge to make things happen and the capability to act. You let everyone feel that they can contribute, no matter their rank in the organization, and they do.

He does all that, then disappears into the background, to take care of the plumbing so that his team can have running water.

Here’s what you don’t do: You don’t tell them you’re empowering them, while spelling out everything they are supposed to do and micro-managing them, because god forbid you feel someone else knows more than you do. You don’t have overt signs of rank, because a nicer office, or more expensive hardware, have a way of reminding people of who’s boss. If you remind people that they have a lane, they may stick to it as you wanted, but also won’t contribute outside of it.

Sadly, there is one line people do remember from this story – West’s pithy phrase of “mushroom management.” He says that’s how you keep a team like this growing: you keep them in the dark and feed them shit.

Context, it turns out, is everything.

West was keeping the team in the dark about if the company believed in the Eagle team, its odds of seeing the light of day, management’s wavering support. Companies take that line literally now, not giving people enough information to make their decisions, run by insecure middle managers who hide behind it, feeling that empowering employees would threaten their position.

And still, the technology industry (and businesses at large) keep forgetting the Eagle’s lessons. Thirty years after this book came out, Dan Pink made a fortune proposing that people are motivated by autonomy, mastery, and purpose. He called this “a surprising truth”.

Maybe that’s the true lesson from The Soul of a New Machine: companies don’t learn. If you want to make money, find a 30-year-old masterpiece and popularize a fraction of it.

Because Soul is a masterpiece. It not only holds up – it feels vibrant, current. The technology industry could learn a few things from West’s team, even now.