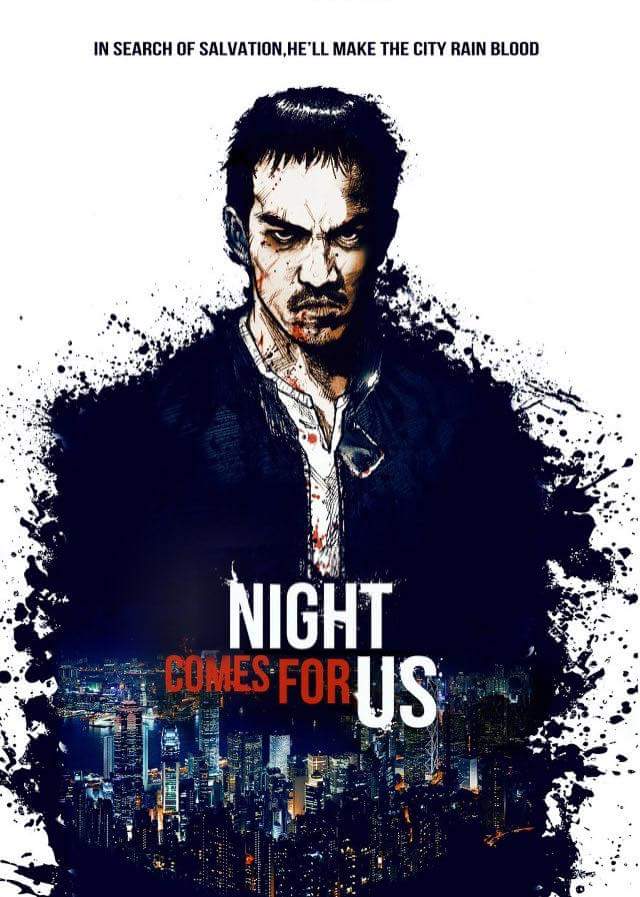 I'd love to see Timo Tjahjanto take a stab at directing a William Gibson adaptation. He'd need to learn some self-control, because it doesn't seem like he can go three minutes without something that shouldn't be near a body chopping into one, but he would be a fit for the sudden eruption of bloody violence that can come up in Gibson's earlier worlds.

The Night Comes for Us, his latest movie, feels like someone put The Passion of the Christ and The Man from Nowhere into a blender, leaned on the button until their bones mostly stopped crunching, then served it as a script smoothie.

It's a basic setup: Ito, a deadly triad enforcer who is supposed to leave nobody alive, takes pity on a girl after his team massacres the girl's entire village. He's not just any enforcer, but one of the feared Six Seas. The triad takes offense at his disobeying them, and sends the other five dreaded killers to follow him into Jakarta and start a cavalcade of carnage.

Indonesian action movies first broke into the West with Gareth Evans' sensational The Raid: Redemption. Not only The Raid was a hit on its own right, but Pete Travis' surprisingly enjoyable Dredd would later liberally borrow from it. The Raid also put Iko Uwais on the map, as well as (to a smaller degree) his co-star Joe Taslim. Both would end up having small parts as “that guy” on a few Hollywood action movies, before reuniting on The Night Comes for Us.

Their signature was the use of Pencak Silat, a hyperkinetic martial art which makes practitioners look as if Bruce Lee had gone on a meth binge and decided to modify Jeet Kune Do to cause as much damage as possible. Night brings it down to the shantytown dirt floor. Assassins efficiently use their signature tools – two wire-wielding women, combined with the urban grime and pervasive crime, were what triggered memories of Jonny watching Molly Mirrors fight on the Killing Floor – but thugs will charge in with cleavers and machetes and anything they have on hand. The defenders don't have the luxury of elegantly knocking one out before moving on to the next – it is an unrelenting wave of bodies coming at them, and they will use anything around them to stab and gouge as they try to survive.

The fights take place in cramped quarters – ramshackle apartments, crowded hallways, stairwells, inside a police truck. They are so full of combatants that even a warehouse seems confining and, filmed often without a single cut, feel improvised and brutal. I haven't seen a movie this obsessed with the specifics of how an individual can get mangled since Hacksaw Ridge (which, I swear, I'll get to around to writing about at some point).

There is no doubt that Tjahjanto is adept at mixing violence and style. His writing leaves a lot to be desired, with his plots brimming with clichés and action movie logic, such as a stylish assassin which shows to help because, I guess, we all wanted to see Julie Estelle again. He is also not consistently good – Headshot was a dull lump of a movie, at most a practice run for Night. When he gets things right, though, his grisly tableaus can make you forget you are watching a movie and generate a reaction closer to reflexive pain avoidance. He is brilliant at visceral butchery, but should look to collaborate with a better writer – I can only imagine what he'd do paired with an Alex Garland. For now, I'll settle for him bringing Stelle's Operator back for seconds.